In memory of Lynda Carlberg, Libraries Southwest honors individuals who have made outstanding contributions to Libraries. Lynda Carlberg was the director of the Calcasieu Parish Library System 1978 through 1997. She was active in state, regional and national Library activities as well as many community activities. She is remembered as an outstanding leader and a very dear friend.

I strolled along the river bank where the water flowed so free.
It was then I saw it standing there, that majestic tall oak tree.

Its branches reached out far and wide and its trunk was huge around.
I just sat in awe and marveled at the treasure I had found.

I wondered just how old it was and the stories it could tell
as it stood above the others in this park, where it did dwell.

How many birds had made their home on a branch where they could hide?
And look, there’s a squirrel’s next over on that other side.

In loving memory of Lynda Carlberg.
We miss you! 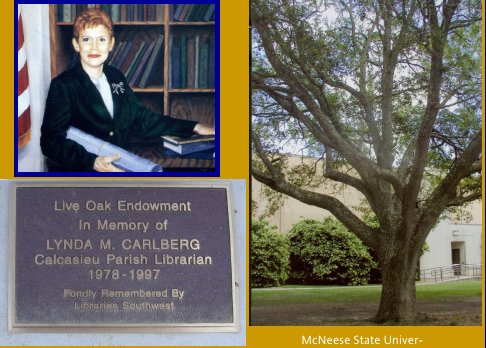 Funeral services for Lynda M. Carlberg, 53, of Moss Bluff, will be at 10 a.m. Thursday, Nov. 20, in St. Luke-Simpson United Methodist Church. The Revs. Jim Humphreys and Mark Holland will officiate. Graveside services will be at 4 p.m. Thursday in Strange Methodist Church Cemetery in Saline under direction of Johnson Funeral Home. Visitation is from 4-10 p.m. today in the funeral home and from 9 a.m. Thursday in the church. Mrs. Carlberg died at 10:20 a.m. Monday, Nov. 17, 1997, in a local hospital.

A native of Shreveport, she received her Bachelor of Arts degree from Northwestern State University in Natchitoches and her Master’s degree in Library Science from Louisiana State University. She was a librarian in the Calcasieu Parish schools from 1966-67 and then a reference librarian at East Texas University, a teacher in the Morehouse Parish School system, branch librarian in the Ouachita Parish Public Library, and from 1972-78 was Director of the Bossier-Red River Parish Libraries.

In 1978 she became director of the Calcasieu Parish Library System. Mrs. Carlberg was a member of the Louisiana State Board of Library Examiners and had served as president since 1990. She was a past president of the Louisiana Library Association and had also served as the associations’ parliamentarian and Legislative Network, State Coordinator. She was a member of the American Library Association, serving on the program, services to the deaf, steering and by-laws and building awards committees.

She was a member of the Southwest Library Association and served on the SLICE Council and executive board. She was a treasurer of Libraries Southwest, Inc. Mrs. Carlberg was a member of the United Way allocation and review panel; a member of the Literacy Council of Southwest Louisiana; a former director, vice president and president of the Family and Youth Counseling Agency; member and former officer of the Quota Club of Lake Charles; former chairman of the Calcasieu Arts and Humanities Advisory Panel; and a member of the Business and Professional Women’s Club. She was an active member of St. Luke-Simpson United Methodist Church.

Survivors include her husband, Tore Carlberg; one son, Kevin Carlberg of Bridge City, Texas; five daughters, Jennifer Netherland of Moss Bluff, Allison Ledet and Karen Monceaux, both of Lake Charles, Jennifer Driggers of Baton Rouge and Melissa Louviere of Greenville, S.C.; one brother, Don Mills of Colorado Springs, Colo.; her father, Donald Mills of Orlando, Flo.; and five grandchildren. Memorials may be made to the Calcasieu Parish Library, Memorial Fund or the Literacy Council of Southwest Louisiana, the family said.